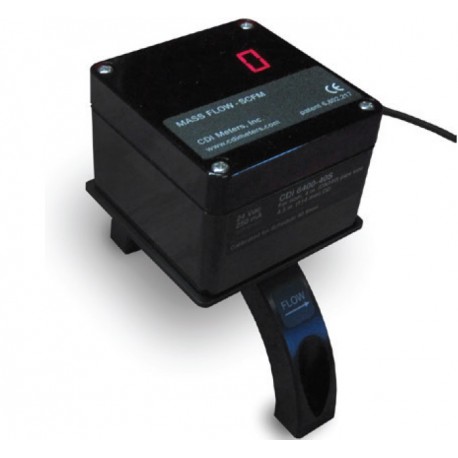 Our initial ruggedized flowmeter is still available for purchase. We now offer the CDI 5000 Series flowmeters with the same great features and the option for wireless monitoring.

CDI flowmeters represent a radical departure from conventional designs. The meter clamps around a pipe with its flow-sensing probes projecting into the pipe through drilled holes. The low cost of the meters makes them ideal for installation throughout an air distribution system.

All of our Flowmeters:

The CDI 6400 is similar to the CDI 6200, except that it has its probes mounted side-by-side in a single ring and it is built for larger pipe sizes. Like the 6200 and the 5000-series meters, it is a thermal mass flow meter in which one probe senses the air temperature and the other is maintained ten degrees above the air temperature. It has the same milliamp and pulse outputs, the same large, bright display, and an optional Modbus RS485 output for networking.

The flowmeter clamps onto a pipe, with two flowsensing probes projecting into the pipe through 3/16 in. drilled holes. It seals directly to the pipe; no cutting or welding is required for installation. Because each flowmeter is made and calibrated for a specific size of pipe, the display indicates flow directly, with no setup or adjustment.