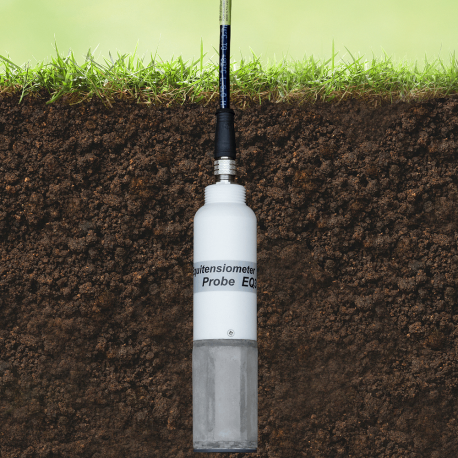 The EQ3 uses class leading ThetaProbe technology to avoid the many problems of water-filled tensiometers. It measures water potential (matric potential) in the range 0 to -1000 kPa and provides an accurate loggable output. It is particularly well suited for use in dry soils.

Nuevas características
The incorporation of thermistor sensor to the EQ3 enables the simultaneous logging of soil temperature and water potential. A new cabling system makes it very easy to extend or replace cables, offering a choice of 1m, 5m, 10m and 25m extensions. EQ3 cables and connectors are buriable (IP68).

Cómo funciona
The EQ3 Equitensiometer is based on the ML3 ThetaProbe - our 'gold standard' precision soil moisture sensor.

Instalación y Uso
The EQ3 is buriable and maintenance-free. It can be inserted into augured holes or positioned in the wall of a trench (which is then carefully back-filled). Optional extension tubes assist placement and removal when burying at depth.

As the EQ3 is rugged, maintenance-free (no refilling, degassing, or topping up required), frost resistant and low powered, it can be used at remote sites over long periods of time. In such instances it is possible to access sensor data wirelessly via a GPRS enabled data logger such as the Delta-T GP2.

Please note that despite its many strengths, the EQ3 should not be seen as a rapid response sensor that covers the full range of water potentials at high accuracy. Such a sensor does not yet exist. EQ3 equilibration time is typically several hours.

Aplicaciones
The EQ3 Equitensiometer is ideally suited to static long term monitoring of water potential in soils and substrates. It can even be left installed in frozen soils. Typical applications include environmental, plant, soil, ecology and geo-sciences research, as well as civil engineering and agricultural engineering applications.

The EQ3's full range is 0 to -1000 kPa but best accuracy is achieved between -100 and -500 kPa. This makes it well suited to plant water stress studies - even in very dry soils.

Registro de datos
The EQ3 can be logged by any Delta-T data logger, including the powerful GP2. It is also compatible with many other manufacturers' data loggers. The EQ3 can also be used with an HH2 Moisture Meter, but only the unconverted millivolt output is displayed.