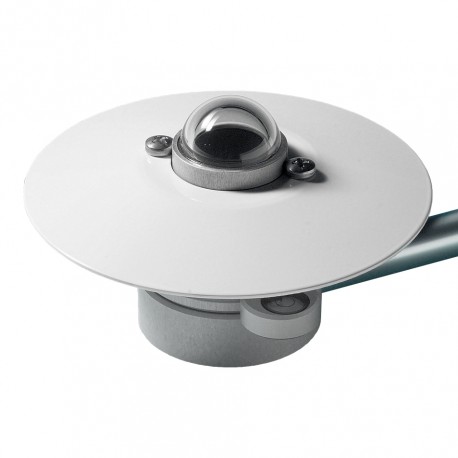 The Delta Ohm LPPYRA 03 Piranometer measures the irradiance on a horizontal surface (Watt / m2).
The measured irradiance is the sum of the direct irradiance of the sun and the diffuse irradiance.
LPPYRA03 is a Class 2a pyranometer, produced in accordance with ISO 9060 and following the recommendations of the "Guide to meteorological instruments and methods of observation", fifth edition (1983), edited by WMO (WMO: World Meteorological Organization).

The LPPYRA03 pyranometer is based on a thermopile sensor. The sensitive surface of the thermopile is painted with an opaque black lacquer, which allows the instrument not to be selective at all different wavelengths. The spectral field of the pyranometer is determined by the transmission of the two crystal domes type K5.
The black surface of the thermopile absorbs radiant energy, thus creating a temperature difference between the center of the thermopile (hot seal) and the body of the pyranometer (cold seal). The difference in temperature between the hot seal and the cold joint becomes a Potential Difference, thanks to the Seebeck effect.

LPPYRA03 is equipped with a dome with an outer diameter of 32 mm and a thickness of 4 mm, to ensure a correct thermal insulation of the thermopile, avoiding wind cooling, and to reduce the sensitivity to thermal irradiance. The dome protects the thermopile from dust, which when deposited on top of the black surface, can modify its spectral sensitivity. To prevent condensation from forming inside the dome in particular climatic conditions, three silica - absorbent tablets - which absorb moisture - are placed inside the pyranometer.